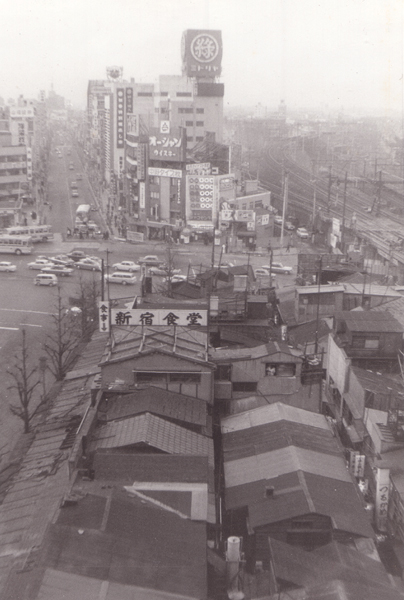 Any description of the history of the Shinjuku Nishiguchi Omoide Yokocho must go back to the time immediately after the end of the War.
Around 1946, the area around the west exit was in ruins in the aftermath of the war, and covered in rubble. Before the war, the area in front of the station had had street vendors selling clothing, footwear, soap and other daily necessities, as well as thirty or forty reed-screen covered stalls selling oden, steamed sweet potatoes, boiled azuki beans, tempura, seaweed tsukudani and second-hand books; these were all burned down. Later, in the period of the controlled economy, the black-market ‘Lucky Street’,a market of street vendors separated from each other by single door boards, grew up. This was the origin of Omoide Yokocho. At the time, families who had been burned out of their homes during the war fled to relatives living in nearby Setagaya, Suginami or Nerima, so that even during the war the population of the area fell by only about one-tenth. Shinjuku was a transit point for traffic from these areas, and served as a terminal for the distribution of people and goods.
So people gathered in Shinjuku, and the street vendors each set up their various businesses.

Around 1947, there was a strict crackdown on controlled goods; this affected the flour that was used to make ramen noodles and imagawa-yaki thick pancakes, and business became difficult. Items that were not controlled included the beef and pork entrails supplied by the occupation forces.
It was from around this time that many of the stalls began to sell roast giblets, which became popular at the time. Today traces of this can be found in the fact that of the 60 or so restaurants, more than half are yakitoriya (chicken skewer restaurants) or motsuyakiya (broiled offal restaurants).

One thing that has been passed on from those days to the present is the style of vendors being separated by a single door board, as described above. Even today, many shops are built adjoining, with a shared wall.

In the late 1950s to early 1960s, what was called a Yakitori Cabaret made an appearance. These were stalls where customers would eat yakitori and drink shochu liquor while being waited on by hostesses dressed up to the nines. From today’s perspective, it would surely have been an interesting sight.

Around 1959, due to a project to extend the Keidanren Line and redevelopment to construct the terminal building, some three hundred shops and stalls that at the time stretched from the Koshu Kaido to the Ome Highway were declared to be squatters and were evicted. The shops from the present-day Palette Building (Shinjuku Nishiguchi Kaikan) to the Ome Highway remained.
From then to the present day, Shinjuku Nishiguchi Omoide Yokocho has continued to develop, offering the tastes and warm-hearted feeling of the Showa Era.

Sources: ‘Shinjuku Nishiguchi Kaikan 40th Anniversary Commemorative Magazine’, ‘Yakitoriya Koshinkyoku, the Story of West Shinjuku’
The above piece was based on reference documents, revised and amended as of April 2021.
TOP