An introduction to the “ultra-Showa” aspects of Shinjuku Nishiguchi Omoide Yokocho, the Showa-retro drinking spot
(To help first-timers prepare themselves)

Hello. My name is Kenji Murakami , and I am the president of Shinjuku Nishiguchi Omoide Yokocho and the second-generation owner of Sushi Tatsu. Whenever Omoide Yokocho is featured in the media, the way it’s described is ‘retains strong traces of the Showa Era…’, or ‘the nostalgic atmosphere of Showa floats in the air…’, and we even send out the same kind of message ourselves. But to tell the truth, it isn’t the kind of vague, hazy ‘Showa’ that can be described as ‘traces’ or ‘an atmosphere’. It’s what you might call a piece of actual Showa. After all, many of the buildings are the barracks that was built after the World War II at the time where the black market was an integral part of daily life; some of the people doing business there are second and third generation; the motsuyaki (broiled offal) shops that started up after the war when goods were in short supply and controls were strict (in Omoide Yokocho, Horaiya was the first to offer “motsuyaki” in 1947) use a sauce that has been added to over the generations; each shop still serves specialty dishes made using traditional recipes.
This ‘piece of actual Showa’ Omoide Yokocho is even today mainly analogue. Right next to Shinjuku Station in this great metropolis, the place has reached the present time without gaining much sophistication. The only places you will find that are like this are perhaps Cuba and Yokocho. Both the people who work in Yokocho and the way the shops operate is so far mainly analogue. The people, the streets, the structure, are all Showa. In this day and age this somewhat ultra-Showa aspect can be inconvenient, so here I would like to explain a few things about the place. If you are planning on coming here for the first time, do please read this so that you can come prepared – and have cash, not plastic, to hand. 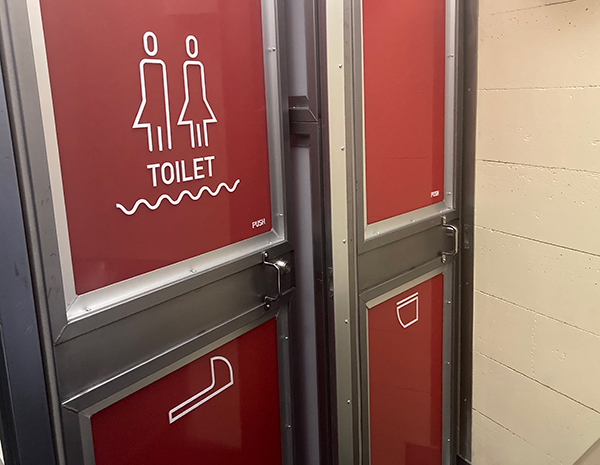 “How friendly are the shops here, they even share the toilet!” That’s right; after all, the naka in Nakadori Street is the naka in nakayoshi, meaning ‘good friends’. Actually I’m not sure if that’s really where the name comes from, but it’s true that the shops on Nakadori Street do not have their own toilets. Customers and staff all happily use the same communal toilet.
Up until the outbreak of Covid-19, every day there would be a long queue outside the communal toilet. Then at the end of March 2021 the toilet was completely remodeled, with an additional ladies-only toilet and a men’s urinal! Hand-washing facilities were also increased, making a visit to the toilet a more pleasant experience. That said, there is no knowing when the toilet will be crowded; I would recommend you not hang on till you have to go; pay your visit a little earlier than you might normally.

Never mind ‘But this is the 21st century’ or ‘I’ll pay contactless’, this is Omoide Yokocho, where we are in the Showa era, and immediate post-war Showa at that. As I write this (in April 2021) some sixty percent of shops still accept only cash payment. “How outdated!!” Yes. “Inconvenient!!” Sorry. (Perhaps I’m hearing things…) Ideally we would like to go even more analogue and bring back the barter system, but now for the time being, in order to keep up with the times and increase convenience for our customers we would like to consider accepting payment by credit card or electronic money. In the meantime, please bring cash when you visit Omoide Yokocho. 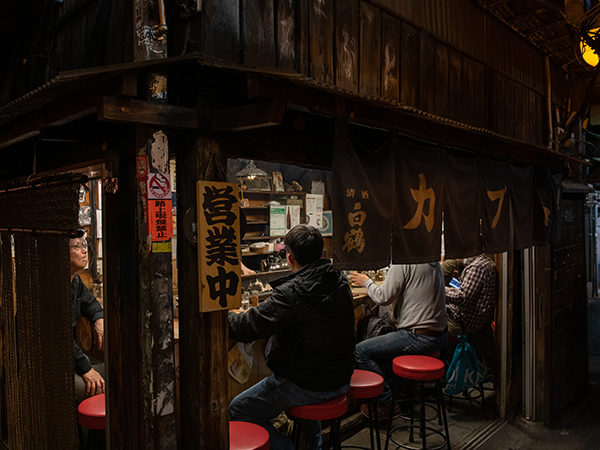 In Omoide Yokocho there are shops that have always had their own rules for ordering. For example, at one of the most popular restaurants in Omoide Yokocho, the eel skewer restaurant Kabuto, basically the only item on the menu is – Everything. Skewers of different parts of the eel prepared by the restaurant – neck, fin, kabayaki – are served up one after the other without your having to order anything. Another rule is that each customer is allowed only three alcoholic drinks, of any kind. You might think this sounds a bit unfriendly, but these are rules possible only in a restaurant so popular that people queue to get in, and the reason behind the rules is the shop’s consideration for the customer; “When customers have come looking forward to enjoying our food, it wouldn’t do to keep them waiting a long time.” “It would be a great shame if customers gave up and left without eating because they had to wait.” In the past there were other shops that had the same kind of ‘considerate rule’ (I just made that name up) of ‘no more than three drinks.’ It’s possible there are other shops even today that have the same kind of rule as Kabuto.
In addition to this, there are shops that have a table charge, shops that require each customer to order one drink and one food item as they enter, shops that set a time limit of 90 minutes on each group of customers. Be sure to check before you go in.

Not an ultra-Showa aspect of Omoide Yokocho, but
smoking on the street is prohibited. 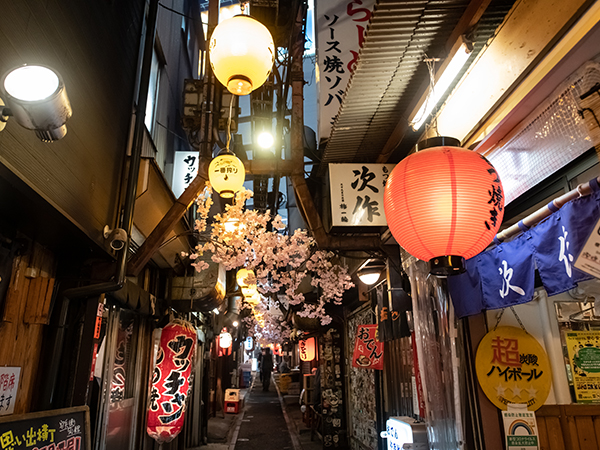 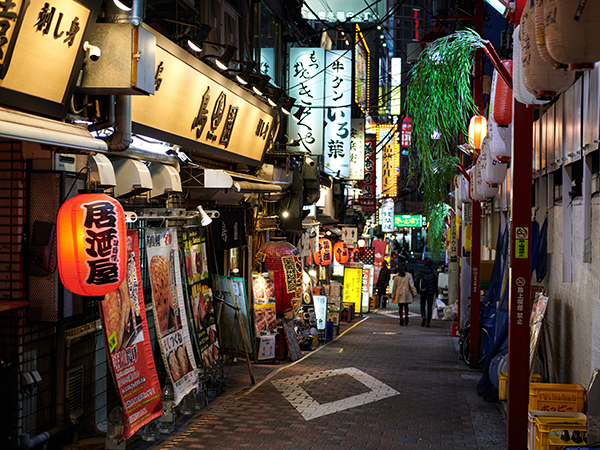 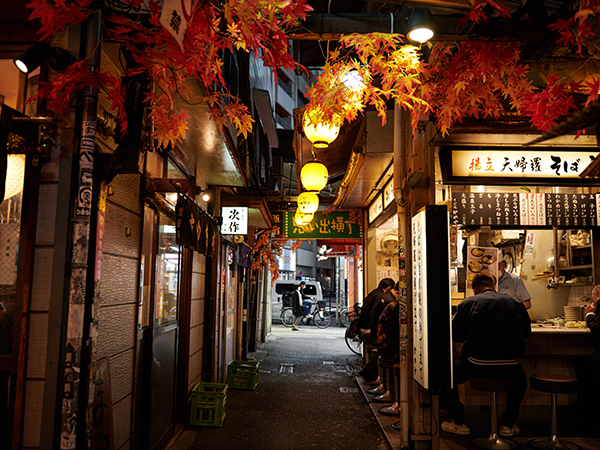 Within Omoide Yokocho, smoking is prohibited except inside those shops where smoking is allowed. Omoide Yokocho is very sensitive about fire. The reason behind this is a fire accident that occurred on the 24th November, 1999. While there were no human casualties from that fire, about a third of Omoide Yokocho burned down.
Making the most of the lessons learned then, the 24th of November is designated ‘Omoide Yokocho Day’, and every year on that day a disaster prevention drill is held during the daytime throughout the whole of the Yokocho. Then in the evening a lottery* is held, with meal tickets and drinks coupons for prizes, as an expression of gratitude to the customers who have given their support.

*The lottery is open only to customers who bring to the venue a ‘lottery ticket’ they receive when they buy the limited-edition ‘Omoide Yokocho Original T-shirt’, on sale from early November to the 24th. Prizes include meal tickets and drinks coupons redeemable in Omoide Yokocho, and accommodation vouchers for local hotels.

I’m sure there are other ‘ultra-Showa’ aspects that might seem inconvenient, but I hope visitors will be tolerant enough to let them pass, or be of the unique disposition to ride them out.

Please, enjoy your drinks and have a memorable time as you soak up Showa to your heart’s content.

The famous Showa-retro shopping district, in business since the immediate post-war period!